Today we have the pleasure of speaking with author John Rust. A natvie of New Jersey, John enjoys writing many genres, including science fiction, action/adventure, cryptozoology, and history. He is currently the sports director for KYCA radio in Arizona. John is the author of 12 books and many short stories. You can read more about John’s works on AMAZON! 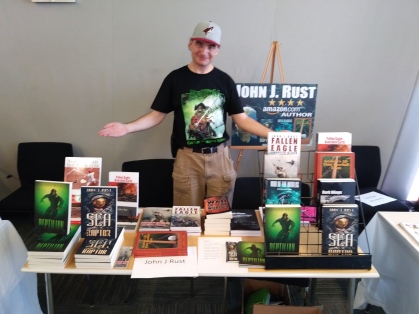 Thriller Magazine: Thank you for agreeing to this interview, John! Tell us a little bit about yourself. How did you get into writing?

Growing up in New Jersey, I’ve always had an overactive imagination, fueled by watching a bunch of monster movies, superhero cartoons like the old Spiderman series, and anime like Space Battleship Yamato. When I got to high school, I really started to pick up my writing with school literary magazines and newspapers, and even worked as a stringer for a local weekly paper. I also did my own short action/adventure and superhero stories that I showed off to a few friends. And I read, a lot. I think any good writer needs to be a voracious reader. Not just stuff in the genre you like to write, but every once in a while you need to venture outside your preferred genre. Later on, I started getting stories published in small magazines and anthologies before I started publishing novels. Right now, I’m up to 13 books.

TM: Sea Raptor seems to be one of your most popular works. What were some of the inspirations for that work, and what do you think sets it apart from similar titles?

I’ve always been fascinated by cryptozoology, the study of mysterious monsters like Bigfoot, the Jersey Devil and such. Even when I was a kid, I used to watch the old “In Search Of” program with Leonard Nimoy. Today, if I see a YouTube channel doing a feature on cryptid sightings, bang! I’m there. Then one night, I had this dream about a bunch of people at the Jersey Shore looking for a sea monster, and the story took off from there. The one thing I wanted to do to make this different from other similar stories is most times, the scientist is the main protagonist, and whoever is chosen as the group’s security guy is usually a one-dimensional character who just says, “Monster bad. Kill monster.” So for “Sea Raptor,” I decided to make the security guy the main protagonist. Along with being a former Army Ranger, Jack Rastun also has great knowledge of the animal kingdom as his parents run the Philadelphia Zoo. Along with all the monster action going on, I really enjoy writing the cast of characters around Jack. His girlfriend, wildlife photographer Karen Thatcher, has one heck of a daring streak in her. Wendell “Geek” Hewitt is a mountain of a man who always has a quip ready and is loyal to Jack. Dr. Ehrenberg is a bit eccentric, but very knowledgeable about cryptids and a very disarming man. Arthur Sherlock Dunmore has a first-rate mind and whenever there’s a mystery to unravel, he can do it. I enjoyed writing them in “Sea Raptor” and its sequel “Reptilian,” and I’m wrapping up work on a third book called “Demon Flyer” which should be out sometime in the near future.

TM: Your Fallen Eagle Trilogy sounds like an exciting series! How did you go about writing the series?

This goes back to when I was in high school and “Red Dawn” came out. I loved that movie, and it was always in the back of my mind to write a story where America is invaded. So a few years back, the plot and characters finally came together and I embarked on the Fallen Eagle trilogy. Instead of Russians, my main bad guys were a UN army under a cult-like figure named Ohmara Sahai. Along with all the action, some of the themes for the book have a lot of relevance given what we are seeing in the news today in terms of trying to silence those with differing opinions, groups who seek to use violence to further their political agenda, and just various threats to freedom and individualism. But as with any story, you have to have interesting characters to draw in the reader. I thoroughly enjoyed writing for Lt. Colonel Ruud, who has to summon all his bravery and ingenuity to battle overwhelming odds during the occupation of Alaska. Another character I enjoyed was his girlfriend Krista Brandt. I wanted to give her a rather unique occupation, and being a metal-head I thought, “Hey, let’s make her the lead singer in a metal band.” I took bits of personality and attitude from some female metal singers I’ve seen in concert, and threw in some other personality aspects to round out the character. Growing up in Alaska, Krista became one heck of a hunter, and her rifle comes into play big-time throughout the series. She also swears . . . a lot. Even more than Ruud, and he’s a Marine. All in all, I was very happy with how the series came out. Cool characters and lots and lots of battles and stuff getting blown up.

TM: What advice would you give to somebody just starting out on their writing career?

Write. Write, write, write, and keep writing. The biggest way to be good at something is to keep doing it. Also, read a lot, like I mentioned before. If your school has a literary magazine, submit a story. There are also plenty of places online where you can post stories and practice your craft. One good place for that is fanfiction.net, especially since you can get reviews from other readers and writers. Being part of a critique group is also a big help. Even if the other members do not write in your specific genre, they can still offer lots of great advice when it comes to character development, flow of a story, and other things. You also need to make sure you are in a group that is supportive and helpful, along with being honest. Critiquing is about constructive criticism, not insults or expressing offense over the views of another member. Writers can write about whatever philosophical bent they want. As a critique group member, it’s not your job to say, “I don’t want to read your story because it does not match my political beliefs.” Your job is to tell the person what works and what doesn’t, and point out any spelling or grammar mistakes. You also can’t be afraid to take criticism. You shouldn’t only look for feedback that states your story is great. You want to hear statements about what didn’t work in a story so you can keep improving as a writer.