Today we get the chance to sit down and talk with P. G. Sundling, the author of The Internet President: None of the Above (you can check out our 5-star review of his novel HERE). The novel, Sundling’s first to be published, has been met with quite a bit of commercial and critical success, and so we took the opportunity to ask about the process behind writing it. If you’d like to check out his novel, you can read more about it on AMAZON! 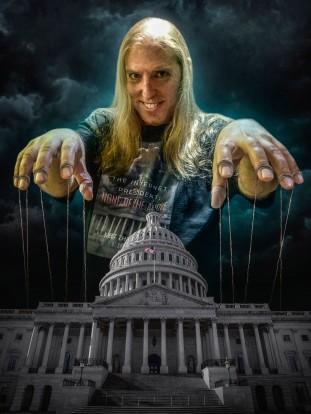 Thriller Magazine: Your novel is unique and well-written, especially considering that it is a debut novel. How did the idea for the novel come about and what was the basic process of putting it together?

I go into a lot of detail on the book’s origin in the “Fact Versus Fiction” section after the ending, but it contains a lot of spoilers. So, I’m going to give just a few broad strokes.

Back in the 80s, the novel started with a single thought. “What if someone changed their name to None of the Above, and they won the presidential election?” Over the next few decades, I collected my insights and ideas. Most of the work on the story came in phases: while trying out for the American Candidate reality TV show (2004), working on the screenplay (2012), and finally, writing the novel (2014-2018).

There was a moment, about a decade ago, where it seemed to me that Americans paid less attention to the two wars we waged in Afghanistan and Iraq than to Kim Kardashian and her reality TV show. As I watched the trend of celebrity worship and misplaced national priorities intensify, I knew that had to be a story element. That crucial decision is one of the reasons why several plot points of the story were almost prophetic. It’s easier to reflect the truth of our time with a dose of satire.

The first screenplay scenes I wrote were action scenes. In the end, I couldn’t help, but make the story into an action-packed political thriller to complement the satirical elements.

TM: How were you able to combine the multiple tones in a way that works?

Tone shifts are risky. Mixing lots of genres is risky. If that wasn’t enough, I wanted to write a novel with the essence of a screenplay. There were so many opportunities to end in disaster.

Since it was my debut novel, I gave myself permission to experiment. It’s more important to make continuous improvements than to get something right on the first try. I didn’t have fans yet, so I could take whatever time I needed.

Intricate plotting comes naturally to me. I worked in software, so I’m used to dealing with complexity. I used my engineering brain to draw order from the chaos. I kept crafting until I got things right.

My story editor read the book to me over the phone along with stream of consciousness reactions. That allowed me to know whether I had more work to do, or if I hit my targets.

Tone shifts can be jarring if not properly set up. There’s an ebb and flow to a story and the shift has to be in sync with story momentum. Imagine tacking with a sailboat. Don’t fight your story winds or you could capsize. The safest place to shift tone is on transitions. Done well, the shock of a tone shift can accent a plot twist.

My experiments turned out much better than I could have imagined and made me a much better writer. The Internet President: None of the Above won one award and was a finalist toward a second award. One of the audiobook narrators, two-time Grammy-winner Stefan Rudnicki said, “If anyone has effectively crossed genres, it’s you!”

TM: There are definitely some strong themes in the book. What do you want readers to be thinking when they walk away from the book?

This book isn’t meant to have a single message. I wanted the book to make people think, so I included a variety of ideas and themes. You can breeze through the book as a piece of entertainment, or connect with the material on a deeper level for a dozen different reasons. Readers remember what’s important to them, what’s relevant to their lives. It will be interesting to see what readers connect with.

For me personally, I hope the concepts of Adaptonium inspire the right people to improve the education system. Of all the concepts in the book, it’s the one with the most potential.

We’re more divided than ever when we need to come together. If we can’t even agree on the truth, how do we fix anything? We need problem solvers, instead of more lawyers and politicians.

There are too many important topics in the book to list. I look forward to interesting conversations about the book and the many different perspectives readers are sure to have.

TM: As far as the second book, where can we expect the sequel to go story-wise? Also, when can readers expect its release?

During the first book, there’s an escalation as the story races towards the action-packed finale. In Hot Nights and Cold Wars, geopolitical tensions raise the stakes further to the international level.

The next book blends fewer genres. It’s a political thriller with science fiction technologies and a dose of satire. I haven’t publicly announced the plot for the next book yet, but here it is:

Kill switches that disable advanced U.S. military technology must be destroyed before a Russian conspiracy can use them. Will the Chinese exploit the weakened U.S. Military? In a world gone crazy, can the president stop the Russian conspiracy and keep Cold War 2.0 from spinning out of control?

As far as release dates go, I can tell you this book won’t take another four years. I retired from programming to write full time. It’s almost June 2019 and I’m getting my affairs in order. After I put my personal life on hold, I’ll completely focus on the novel. If all goes well, the book will be finished in late 2020.

TM: This novel is the perfect kind of work to be transitioned into a movie or TV series. If that was to ever happen, who do you think would be the right director and actor/actress for the 2 leads?

Thanks for noticing! When I first decided to switch from screenplays to novels, I wanted to keep the essence of what I loved about the screenplay format. The result was my terse cinematic writing style.

The Internet President: None of the Above is best suited to a TV season on Netflix or HBO, but I wouldn’t say no to a movie.

In Fight Club, David Fincher showed he could handle tone shifts between action, social commentary, and satire masterfully. He’d be an ideal choice. Getting any well-known director, like J.J. Abrams or James Cameron, would be amazing, but the material might really pop with an outsider who has something to prove.

During the book editing, casting roles was a big pastime for beta readers. As a reader favorite, Maria got the most attention. Starting out, I thought of Eva Longoria, who was politically active. If political ideas from the novel interested her, she might champion the book. Michelle Rodriguez did great action scenes in Avatar and The Fast and the Furious series of movies, so I knew she could pull off the fight scenes.

When I started writing the novel in 2014, Asian male leads were rare so I wasn’t sure who I would cast. I foresaw the ascendance of Asia and wanted to be ahead of the curve. Since then, there’s been a TV show about an Asian family, Fresh Off the Boat, and an all Asian major movie, Crazy Rich Asians. I predict Asian actors will become more prominent over time and that eventually another Mandarin word will be added to the English language, Aiya!

Thank you for the interview, Mr. Sundling! Don’t forget to check out his debut novel on Amazon!