Today, I have the privilege of interviewing a very accomplished author, Andrew Bourelle! Andrew Bourelle is the author of the novel Heavy Metal (now available on Amazon) and coauthor with James Patterson of Texas Ranger (Now Available). His short stories have appeared in a variety of publications and have twice been selected for inclusion in The Best American Mystery Stories. Andrew’s short story, “Three Bullets”, was included in our first issue this past July, which you can read HERE! 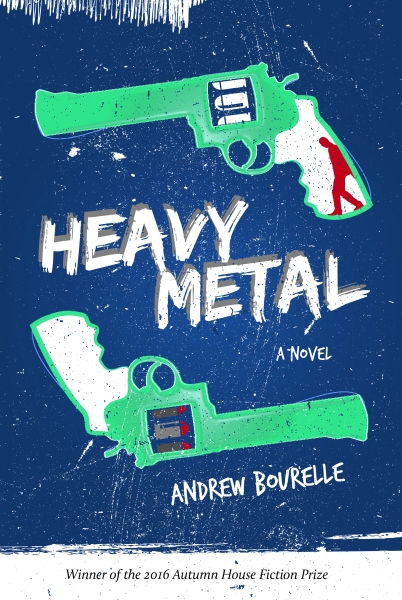 I was an avid reader growing up. I read Roald Dahl and Beverly Cleary and The Chronicles of Narnia. Throughout middle school and high school, I read Stephen King novels and X-Men comic books and anything else I could get my hands on. I wasn’t a great student, but I did well in English because I loved reading Watership Down and Of Mice and Men and stories by Poe and plays by Shakespeare. I always wrote too. For as long as I’ve loved to read, I’ve also been making up my own stories. When I was in elementary school, I wrote stories and comic books about knights and Indiana Jones-type adventurers. Later in high school, I wrote stories about ghosts and western gunfighters. I loved reading stories that I thought were thrilling and exciting, and so I tried to write stories that would pull readers in and keep them engaged. My tastes have broadened and diversified since then, of course, but in some ways, I’m still the same kid I always was. I just finished reading Stephen King’s newest book, and now I’m starting an Old Man Logan graphic novel. My twelve-year-old self would have been reading the exact same things.

Are there any professions or experiences you have had that have helped you as a writer?

I was a newspaper reporter for about six years after I graduated from college. Writing fiction is very different from writing journalistically. However, the experience helped me tremendously. I learned to write quickly. I learned to write even when I don’t feel like it. It made me a disciplined writer. I don’t sit in front of a blank computer screen and wait for inspiration to strike. I know the only way to make the words come easier is to put them down even when the writing is difficult.

Being a reporter also gave me a lot of interesting life experiences to draw from: sitting in a courtroom for a murder trial, taking a tour of a maximum-security prison, doing a ride-along with paramedics, learning about how local government works, covering a wildfire and being on scene to feel the heat of flames and see ash falling from the gray sky like snowflakes. There were all kinds of things I did as a newspaper reporter that I’ll be drawing from as a writer for the rest of my life.

What project have you enjoyed working on the most?

I’ll describe two (because I couldn’t decide on just one):

The first is my novel Heavy Metal, which was published in 2017 by Autumn House Press. This was my first attempt at writing a novel. I’d been writing short stories for years, and Heavy Metal was very much an experiment to see if I could write something longer. I didn’t think about marketing or audience or if I could get it published—I just wrote the book I wanted to write. I wanted it to be a character study that showed a week in the life of a depressed teenager, but I also wanted to build and maintain suspense. I think of the book as a literary thriller. I’m heartened when I read that people call it a “page-turner” or say it was “impossible to put down.” And I was beyond thrilled to win the Autumn House Fiction Prize. I’ve read several of the winners of the prize, and I’m humbled to be in the same company as these fantastic literary authors.

The second project was Texas Ranger, which I coauthored with James Patterson. Jim selected one of my short stories, “Cowboy Justice,” for The Best American Mystery Stories 2015, and afterward he asked if I wanted to collaborate with him. Our first project was a novella called The Pretender, which was a lot of fun to work on. To coauthor a full-length novel with him was an even bigger thrill. He’s a master of the mystery/thriller genre, and I learned so much from working with him. Texas Ranger comes out Aug. 13, and I can’t wait to see it in bookstores!

Thank you for the great interview, Andrew! You have definitely accomplished a lot in your writing career and are an inspiration to a lot of aspiring writers. I was honored that you offered your story for our inaugural issue.