Today we have the pleasure of speaking with Joe Giordano, and accomplished author. Joe’s most popular works are the novels set in his Anthony Provati thriller series. The series’ second installment, Drone Strike, is set to be released on April 15. It has already received several raving reviews, and it is now up for pre-order. You can find the book on AMAZON and BARNES & NOBLE.

For the next few days the e-book version of the novel is available at a discounted price of 99 cents, so definitely take advantage of that promotion if the story interests you. You can learn more about Joe and his other works on his WEBSITE. 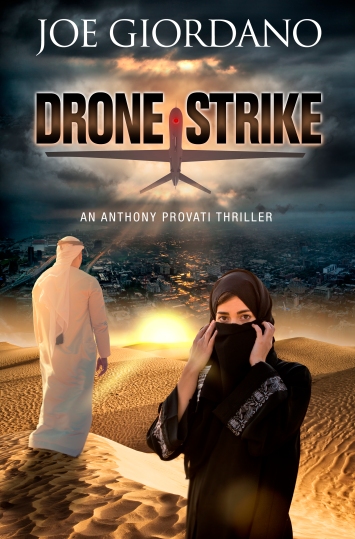 Thriller Magazine: Joe, thank you for agreeing to this interview. Before we talk about your newest release, Drone Strike, An Anthony Provati Thriller, I’d like to ask about your background. You have a rich Italian heritage and have also retired from a successful career as the International Executive Vice President of 3M. I know your first full-length book, Birds of Passage, was influenced by your heritage and your Anthony Provati thriller series has a strong global feel to it. Do you find this series to be influenced by many of the travels you’ve experienced?

Joe Giordano: Yes. During my 3M career, I was privileged to run businesses around the world and be introduced to many cultures. For example, I was Managing Director of Greece and the Middle East out of Athens and had first-hand experience with most of the locations in Drone Strike. My wife Jane and I also lived in Brazil, Belgium, and The Netherlands, and I traveled extensively in Asia-Pacific, Europe, and Latin America. I draw from those experiences in much of my writing.

Regarding my Italian heritage, my grandparents and my father were immigrants to New York from Naples, and in writing my first novel, Birds of Passage, I tried to capture how immigrants thought and acted. Kirkus reviewed Birds of Passage: “Part thriller, part love story, part coming-of-age narrative …. A refreshing rethink of the archetypal mafia novel.”

TM: Congratulations on the release of your newest novel, Drone Strike. With this being the 2nd novel in the Anthony Provati series, what are some things that readers can expect with this newest installment?

Joe: Iraqi Karim’s family is killed by a U.S. drone strike as ‘collateral damage.’ The Islamic State in the Levant exploits his rage, recruiting him for a terrorist attack on the U.S., and only Anthony Provati can stop him. Drone Strike takes you on a fast-paced adventure across the Mediterranean, into Mexico, finally arriving in the States. Drone Strike explores the psychological realities that seduce Karim to commit an act of terror, includes a love story between Moslem Karim and Miriam, a Christian woman he defends in Turkey, and highlights the plight of Middle Eastern and Central American refugees.

TM: How has Anthony’s character progressed from the last book? Has he changed much between the books, or can readers expect this book to pick up from where the last one left off?

Joe: In Drone Strike, we find Anthony where we left him in Appointment with ISIL, the Greek island of Santorini, although each book can be read as a stand-alone work.
Readers identify with Anthony, an unlikely hero with strengths and weaknesses, a normal-type guy thrust into extraordinary circumstances. In Drone Strike, he continues to evolve as all good fictional characters must.

TM: Writing a good book is no easy task but writing a sequel that is even better can be a more challenging undertaking. It can be difficult to write a sequel that is fresh and can stand on its own feet while still feeling like an organic follow-up to the previous installment. How did you approach writing Drone Strike so that it’d be exciting to fans of the first book but also be able to attract new readers?

Joe: With Drone Strike, I wrote another page-turner, set on an international stage with new, interesting characters and an intriguing plot. As Kirkus termed Appointment with ISIL, “a roller-coaster ride to the finish.” As a night club pianist, art gallery owner, and sailor, Anthony’s character supports varied adventures, and we’ll see him again after Drone Strike.

TM: One final question (this is a bit of a fun one). Action/thrillers are in high-demand in Hollywood right now. If you could pick any director/actor combo to bring Anthony Provati to life, who would you pick?

Joe: As directors, either Denis Villeneuve or, of course, Martin Scorsese would do a wonderful job with Drone Strike. Christopher Pine and Ryan Gosling are in their mid-thirties and either would make a great Anthony.

Thank you for the interview Joe! If you enjoyed the interview, be sure to check out Drone Strike on AMAZON and BARNES & NOBLE.

2 thoughts on “Interview with Joe Giordano”